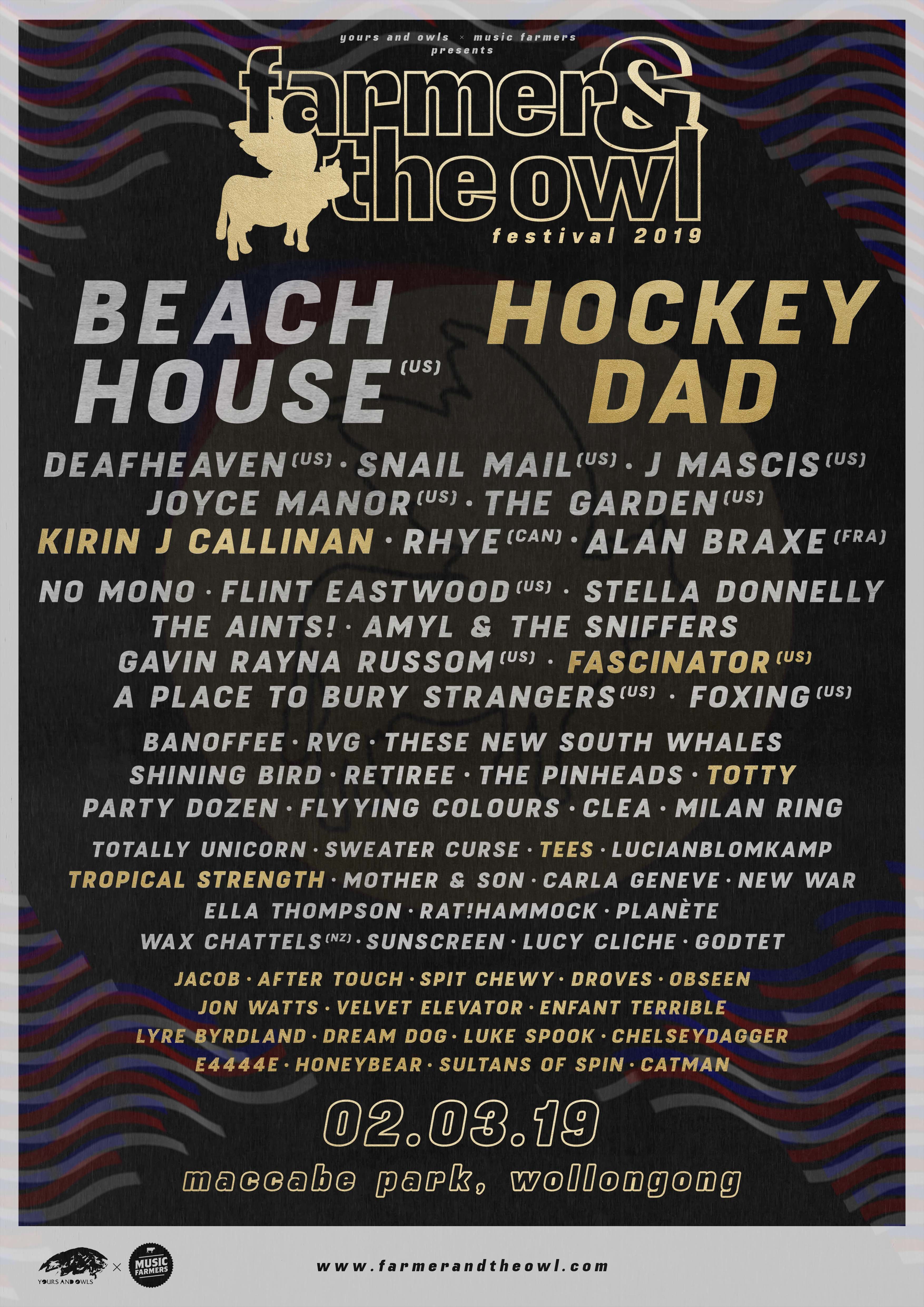 Farmer and The Owl Festival is set to become the tastemaker’s music festival of choice. Thoughtfully curated by the Farmer and The Owl label family of Hockey Dad, Totally Unicorn, The Pinheads, TEES and Tropical Strength, to quench the thirst of the music lover who is searching for that sense of discovery, the high of the unknown and the buzz of falling in love with fresh sounds that are yet to saturate the mainstream.
Farmer and The Owl Festival heterogeneous line up has just expanded, featuring a list of local talent that will blow your collective musical minds……you can watch the line up video here and listen to the official Spotify playlist here.
Wollongong’s Hockey Dad have just been going from strength to strength with the release of last year’s sophomore album Blend Inn. The triple j featured album includes foot stomping, catchy-as-hell lead singles ‘Join The Club’, ‘Homely Feeling’ and ‘I Wanna Be Everybody’, and cements the childhood friends as a force to be reckoned with. The globe-trotting duo have travelled extensively through North America playing headline and support shows, including showcases at SXSW and a Canadian tour with Dune Rats. They have performed across the UK, Europe, and further across Australia as the main support on the 25+ date tour for iconic Aussie rock band Grinspoon, plus more shows alongside Dune Rats and Wavves in some of the country’s biggest venues - a world away from the 70-cap band room where Hockey Dad first cut their teeth.
Walking the fine line between poseur and provocateur is what makes Kirin J Callinan such a fascinating artist. His 2017 second album Bravado gained attention overseas with massive track ‘Big Enough’ which has clocked up over 3 million streams on Spotify. The past few years have seen Callinan tour the US with Pond, the UK with Mac Demarco, make his acting debut in acclaimed director Jane Campions "Top of the Lake" series 2, and arrive at Splendour in the Grass with a stage full of collaborators. This follows a cycle of recording and touring internationally that includes opening for Tame Impala at the celebrated Hollywood Forever Cemetery shows, a glittering set at Paris Pitchfork festival, lifting the funkadelia across both the Mark Ronson album and live shows, and opening for Crowded House at the sold-out Opera House forecourt shows.
Between two lands is kinda the perfect description of where Johnny Mackay aka Fascinator (US) has been situated for the past few years, both in a subconscious and physical sense. After the dissolution of his ARIA chart-topping rock band Children Collide, the singer moved to New York from Melbourne in a self-described moment of masochism. And that’s when Water Sign – Fascinator’s triumphant album – began taking shape. Mackay describes Water Sign, featuring ‘Sex Crystals’, ‘Showin’ Off’ & ‘Skin Within’, as a collection of situational soundtracks, influenced by wherever in the world he was at the time. The album was also informed by the hundreds of records he was being exposed to as an in-demand New York DJ, playing everywhere from rooftops, to fancy hotels and on boats floating past the Statue of Liberty.
Three-piece rock band from Wollongong, TOTTY, spent their early years writing and recording music out of their own shed. Since those days, TOTTY have burst onto the Australian music scene with debut single ‘RIFF’ and follow up singles ‘SIGH’ and ‘Uncomfortable’. TOTTY have moved on from their humble beginnings to share their music with the masses, touring festivals such as Yours & Owls Festival, Sounds of the Suburbs, and supporting the likes of Ruby Fields and Skegss on sold out tours across the country. These experiences have imbued TOTTY with a loud and energetic live set that has built them a reputation as a band to keep an eye on and an ear out for.
Dreamy two-piece house-pop outfit TEES will be bringing the nostalgia with their 90’s acid-soaked dancehall vibes of ‘Got The Feeling’. Forging their platonic love from a carefully constructed cup of tea, the Sydney duo will carefully set you down on a bed of clouds with their lusciously ethereal track ‘Playground’. Creating their own path of music that reminds all who listen of a time and a sound that cannot easily be defined.
Tropical Strength are an experimental duo from the Coal Coast of NSW. Founding members and brothers Al Foil and Sir Dinsington create a peculiar brand of art damaged pop music that is eerily familiar but sounds like nothing else. Each song is a magical mystery tour into the psyche of chief songwriter Al Foil and his day to day visions, childhood memories and surreal happenings. Sonically, Tropical Strength echo sounds of 60’s psychedelia, yet brewed in an entirely unique fashion and steeped in contemporary flavour.
Jon Watts is a Melbourne based producer, DJ and musician. Over the last decade Jon has traversed a number of styles as a live performer, including no-input mixing, free improvisation, and hardware techno experiments. As a DJ, Jon is a staple of Australia’s East coast warehouse party scene and has forged a unique style that seamlessly combines styles from free Jazz to hi-modern composition, minimal techno, house, jungle, UKG and everything in between.
Not to mention the vast array of local talent from the fertile musical landscape of Wollongong and it’s surrounds.
Farmer & The Owl Festival debuts this March, at its new home among the steel lined laneways and lush urban parklands of McCabe Park in the heart of Wollongong, lined with spacious lots and secluded post-industrial alcoves for music consumption and discovery!
Farmer & The Owl is the perfect way to usher in the cool change of Autumn, with 3500 other music fans, some of your favourite artists, and a bunch you are about to discover who will become just that!